The Book of Kells

The Book of Kells is a permanent exhibit located within the McClelland Library. The Library is home to one of the rare full color facsimiles created in order to increase education, study and access to the Book of Kells located at Trinity College in Dublin. The McClelland Library’s Book of Kells exhibit includes paneling and information provided by the curators of the original at Trinity College as well as a video on the creation of the rare full color facsimile.

The Book of Kells exhibit is available at no charge for all hours the McClelland Library is open to the public thanks to the generous support of the book’s donors Sean and Janet Lee. 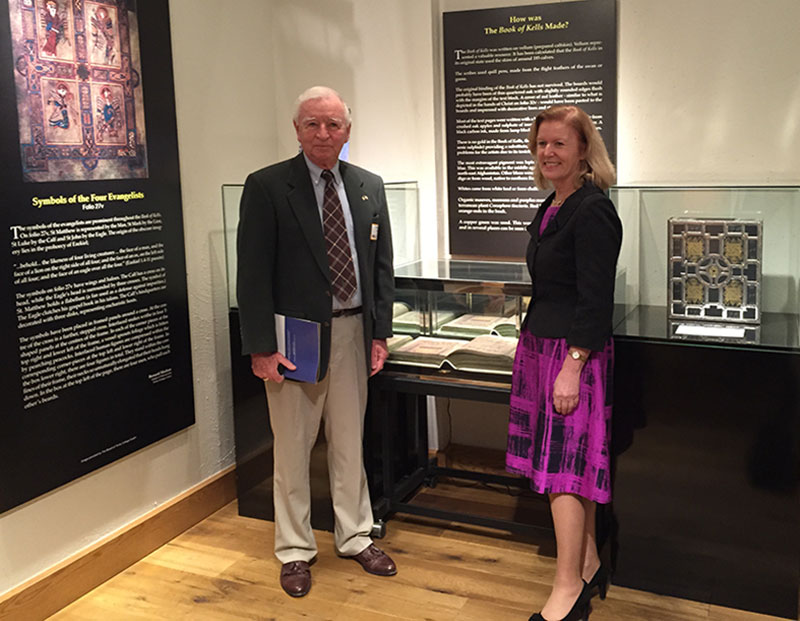 What is the Book of Kells?

It is a beautifully decorated 8th-9th century manuscript containing the four Gospels of the New Testament, relating the life of Jesus Christ. It is written in Latin.

Where did it come from?

Producing books in the medieval period was costly and time consuming. The Book of Kells was written on vellum (treated calf skin), and the 340 folios (pages) were manually sewn together. It is believed to have been crafted partially on the island of Iona (off the west coast of Scotland) and partially in Kells, around 800 AD. St. Columba had founded a monastery on the island of Iona in the 6th century. At the time monasteries were centers of erudition, and contained a scriptorium: a library where books were copied by monks, entirely by hand. St. Columba’s monastery was attacked by Vikings and the surviving monks took refuge in Kells, located north-west of Dublin in the nearby island of Ireland. See Map

Why is it so famous?

Its illuminations: the text is ornamented by colorful decorations. These are found usually on the first letter of the page, in the margins, and some illustrations take the whole page. Images of Christ, the Virgin, the Evangelists, animals and plants can be found in unexpected places: look for them!

Where can I see it?

The original is preserved in Trinity College Dublin in Ireland.
For digitized images of the Book of Kells, see Trinity College Dubin’s Digital Exhibit
The facsimile on exhibition in the McClelland Library was produced by a Swiss company in 1990 and gratefully loaned by Sean and Janet Lee.

The Book of Kells Kids Connection:

The Book of Kells Kids Connection contains lesson plans and activities for parents and teachers.  The Library hopes to engage future generations with the art and history of Ireland through the study of the Book of Kells.